Waukesha has come to be one of my favorite shows for a lot of reasons, and this year did not disappoint!  Friends came from near and far to show and it was positively wonderful to see everybody.  All of Mendel's siblings (except for Kiska in Alaska) were there and it was so wonderful to see them as they each grow up.  Mendel has been hard at work growing some "big boy coat" and I couldn't be more proud of how well he showed... for the most part.  :)

Mendel - Winners Dog / Best of Winners (4 Points)  and BOB in the Owner Handler Series
Mendel's FIRST MAJOR!  He showed the best he's ever shown and it paid off!  SO proud of my boy! 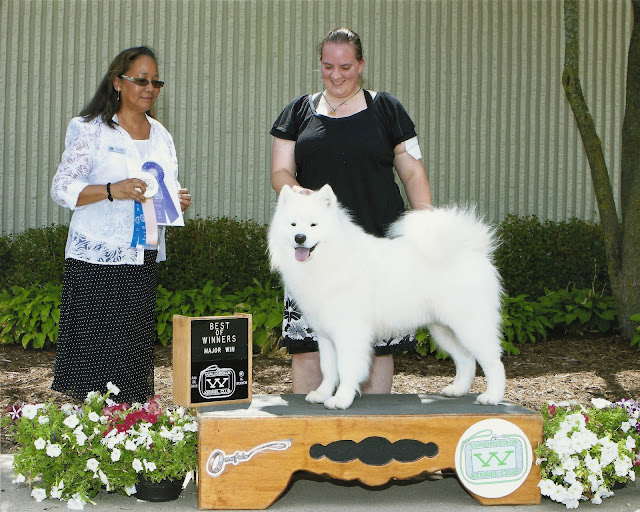 
After the show we did a family picture with all of Mendel's siblings along with daddy Rico.
This picture cracks me right up.  It totally looks like FISH and Rico are goofing off, Fraggle is getting caught up in it but trying to be good, and Mr. Serious Face Mendel is sitting there all stoic-like and telling everybody to knock it off because we're supposed to be having a nice picture.  Of course, in reality, Mendel is the last guy on earth you should be relying on to be all serious-like.﻿

Mendel - Winners Dog (2 points)
This was the one and only time I got mad at Mendel.  There was a major in girls, but only 2 points in boys so we were really gunning for the cross-over.  He did pretty well for Winners, but when we went in for BOB to attempt BOW he was a total disaster - distracted duffus boy who wanted the girl behind him and refused to pay attention to me.  I suspect the judge was already a little disappointed in me for my lackluster performance with a girl I showed (I think I'll do a post on this another day) and an uncooperative dog was the last thing on earth I needed.  It would have been SO nice to have had both of our majors out of the way, but we've since had a talk about it and I've forgiven him.  Life goes on...  :)


I did a count the other day.  Mendel now has 8 points and 10 reserves.  Sure, the reserves are frustrating, but in the end I must say that I'm pretty proud of the fact that we've gotten a good look so many times... even if we didn't always get the points.  As a newbie who's still learning with a dog who's still young and goofy, I have absolutely no doubt we've got a bright future ahead of us.  And even when my dog is a total butthead, I still get to take the best one home with me.  :)