It's our first day of overnight temperatures below 40 degrees and Mendel is loving it.  We've been building up distance and now we're ready to tackle our first qualifying run.  The plan is 6 miles - three miles out and three miles back.

Mendel waits patiently for the bike to get set up:

The first two miles of crushed limestone trail are familiar territory we've been on before.  The trail is dark, but I'm nearly over my fear of running in the dark and the cool air is enough to encourage Mendel to keep a good pace.  Mendel crossed a number of noisy bridges with ease now that he's learned there's nothing to be afraid of.  He also did beautifully at the handful of street crossings we had to navigate.  He clearly understands the "Easy... time to check for cars" command. 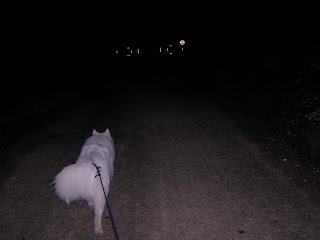 
A few "on by" commands were necessary to keep his senses focused on the trail rather than on the hunt.  "On by" seems to be one of his favorite commands, likely because it's followed by a whoop of praise and "good boy's" from Mom when he gets it right. 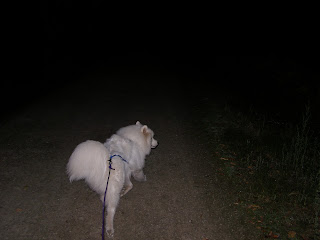 Not long after making our way down a densely wooded and dark section of trail we encounterd a new challenge: a tunnel that runs under a street passing above the trail.  At first Mendel didn't seem bothered by the tunnel, but once the sound of my bike tires in the gravel echoed in the tunnel around him he recoiled.  This is the first time the two of us have had a close call.  I wasn't expecting the loud echoing and was unprepared for his reaction.  My front tire neared the slack line and my heart dropped.  Fortunately, I was able to come to a quick stop and the line didn't' become tangled.  I called Mendel to me to reassure him quietly as we rode out of the tunnel side-by-side.  Once out of the tunnel I sent him out front and we were back in action.

The Waning Gibbous Moon joins us on our journey 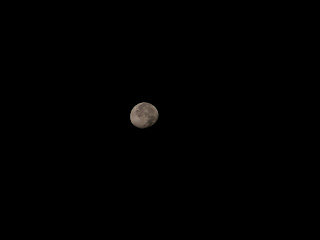 
The next segment of the trail was positively beautiful.  We were surrounded by dense forest, the kind of woodland that swallow sounds and give you a feeling of both complete solitude and community among the natural world at the same time.  The sun was coming up behind us, and a beautiful sunrise was visible to the right as we passed a clearing that provided a lovely view overlooking a farmstead. 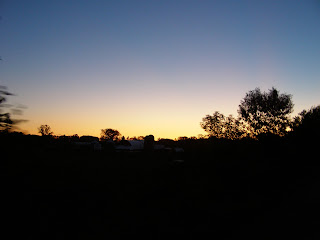 Soon we came to the midpoint of our adventure.  The trail map made it look like we should find a park nearby, but we didn't see it.  No mind, there was a nice wooden bridge that looked like a good place to stop and take a break.  The only problem was that we didn't see any major landmarks near which to take our midpoint picture documenting the trip.  Then I remembered, just a little ways back I saw a 3 mile marker next to the trail.  After our break we headed back to the marker and stopped for a picture. 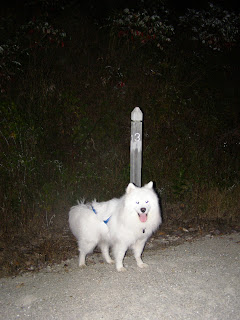 Now we were riding into the sunrise and the farmstead was looking even more picturesque.  This time I was prepared for the tunnel.  I whooped and encouraged Mendel all the way up to the tunnel and then cautiously remained silent as we passed through it so as not to spook him.  This time he was only slightly nervous, and was able to make it through in front of me.  When we got out of the tunnel I cheered and gave him a big "good boy" and he took off down the trail quite proud of himself.

The daunting tunnel ahead, just barely visible by the small reflectors on each side:
﻿ 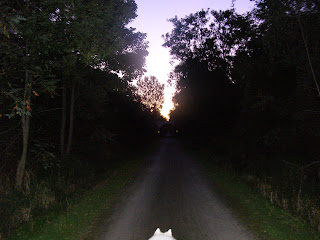 
About a mile later we stopped for another break and took a quick picture now that the sun had come up enough to get a good one. 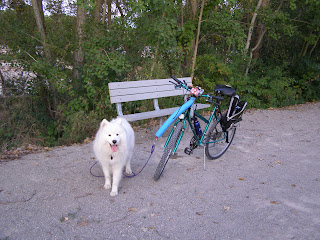 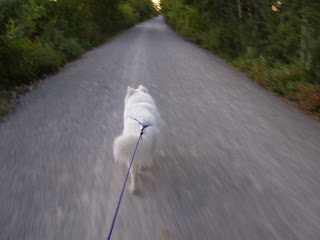 Half a mile from the end of our journey we came upon a lady walking on the trail.  Mendel performed a perfect pass and I was one proud Mama.  (I can only assume the lady thought we were crazy with all the cheering Mendel was getting for a good pass.)
﻿
The home stretch 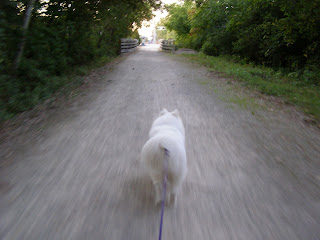 
We took a couple pictures by the big sign at the head of the trail and headed for home. 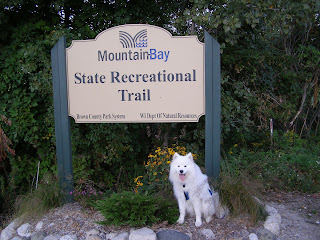 All-in-all it was a great first qualifying trip toward our WS title. 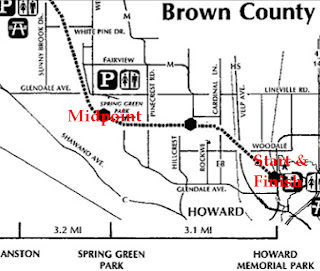