How a Conformation Dog Show Works

First of all, let's take a moment to look at the word:  Conformation.  Not ConFIRmation, ConFORmation.
There will be no confirming happening at a dog show, only judging of how well a dog CONFORMS to his or her specific breed standard.

The breed standard is NOT determined by the AKC or any other registry, it is determined by the breed club of each individual breed.  This means that when a Samoyed is judged at a show he is judged against the standard that the members of the Samoyed Club of America (which consists of Samoyed owners) has voted upon.

Often, people who are unfamiliar with Conformation shows compare them to "Beauty Pageants" for people.  Let me explain how this is untrue.  If Pageants were like dog shows, the women would not be wearing high heels, they would be barefoot.  When they came out on stage we would require them to run (not saunter) around and we would be looking for effortless movement, much like when a competitive runner has his or her gait evaluated.  We would look at their bone structure and examine how well their bone lengths and angles conform to the standard of perfection set for them.  We would examine the shape of their heads, their hips and their spines and then judges would put their hands on them to actually feel these bones.  Judges would examine things like proper eye shape, ear set/shape, proper finger length, distance between shoulder blades, arch of the feet, foot size, etc.  A woman caught in the "ring" having had plastic surgery would be banished from competition for life.  I don't know about you, but I've never seen a Beauty Pageant like that.

Simply put - Conformation shows are not just about "pretty".
How it works:


First, let's clarify some terminology.  In the conformation ring males are "dogs" and females are "bitches".  This is the terminology I will be using from here forward.  In cases where I am referring to both sexes I will us K9 so there is no confusion.

There are two major categories of K9's in conformation shows.  Champions and Non-champions.  The first portion of the show is for Non-champions and the points earned in this portion are accumulated in order to reach the 15 points required to become a Champion.  All K9's are competing among members of the same breed for both the Champion and Non-champion portions.

Non-champions are divided by sex and compete in the first portion of the show.  Each sex can enter any of the following classes:
Some of these classes are optional and not necessarily at every show, but for this example we'll say they are all available classes.  Some shows, a National Specialty for example, will even have more options.
These options exist for both sexes so there will be an Open Dog and an Open Bitch class, an Am Bred Dog and Am Bred Bitch class, etc.

All the Dogs will go first.  Each class will be judged separately and each class that has an entry will have a 1st place winner (unless the judge decides that the class is so poor that he is withholding ribbons).


Let's say for our example there is a 1st place dog for the Puppy, Amateur OH, Bred By, and Open classes.

Now, it's time for all 4 of those class winning Dogs to go in the ring together so that the best among them can be determined "Winners Dog".  Here is where points can be won.  I won't overwhelm you with the calculation of these points, but know that a K9 must get this far to earn points.  Let's say that the dog from the "Open Dog" class is the one who is selected "Winner's Dog".  Now, the dog that was #2 behind him in the Open class will come into the ring and a "Reserve Winners Dog" will be chosen from the remaining #1 dogs in the ring and the #2 Open dog.  This is so that in the event the Winners Dog is somehow disqualified after the fact, there is a reserve winner to take the points instead.

Confused?  Maybe this graphic will help.  Click on it to make it bigger. 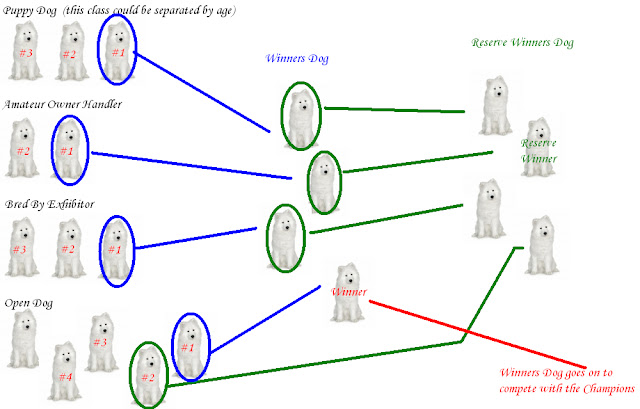 Ok, so now we have our Winners Dog.  Time to do it all over again with the Bitches.  It works the same way, and at the end we will have a Winners Bitch (and a Reserve Winners Bitch).  These two Winners (not the reserves) now get to compete with the Champions.

The Champions are treated like one big class.  All of the dogs are competing together and only one Best of Breed will be chosen among them.  The Winners Dog and Winners Bitch will compete with the Champions and can win Best of Breed, but they are also competing against each other to become "Best of Winners" (If the Winners Dog, for example, were to win Best of Breed, he is automatically Best of Winners).  Best of Opposite sex is then chosen from the K9s of the opposing sex of the BOB.  So, if a Bitch is selected as Best of Breed, a Dog will be selected as Best of Opposite Sex.  Depending on the number of K9s competing and on the judge's preference some K9's may also be given Awards of Merit or Select Bitch/Dog awards.

Once a Best of Breed is chosen, depending upon the kind of show, there may be further competition.  If the show is for one breed only, called a "Specialty" show, the Best of Breed award is where the competition ends and the winner can add BISS (Best in Specialty Show) to his or her name.  Often, at a Specialty there is much more competition within the breed than at a show that includes more breeds.  If the competition is at an All Breed show, the BOB goes on to compete with other breeds.  The BOB from each breed will compete in his Group.  The AKC has 7 groups.
Each Group will have placements from #1 - #4.  The #1 finishers will go on to compete with the 6 other group winners in hopes of winning Best In Show!

When you watch Shows on TV, you're usually starting at the point where all the Champion and Non-Champions have already competed and the BOB's have been chosen.  I think the parts they don't show are more fun because you can see more dogs of your selected breed.  So, if you decide to go see the real thing in action, now you know how it works.